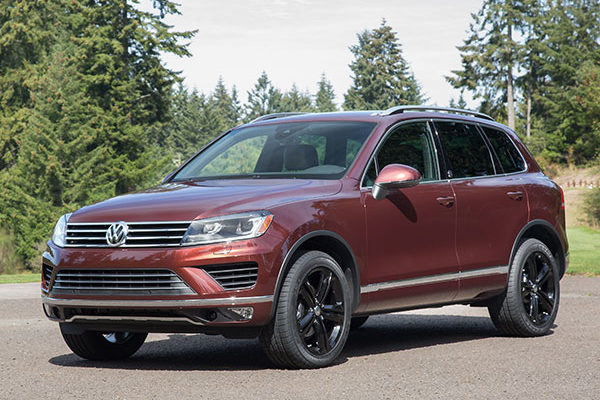 The 2017 Volkswagen Touareg is an attractive five-seat all-wheel-drive crossover SUV. With underpinnings shared by the Porsche Cayenne and Audi Q7, the Touareg is the most costly, luxurious, and largest Volkswagen sold in America.

Touareg is comparable to the Mercedes-Benz GLE, BMW X5, Audi Q7, Land Rover Discovery and Range Rover Sport, Cadillac, Lexus, Infiniti, and maybe the Jeep Grand Cherokee Summit. As with the Volvo XC90, the Touareg might be more accurately viewed as premium rather than luxury, falling between mainstream and upscale. It’s conservative, cautious, and thoughtfully engineered.

The 2017 Touareg is in the sixth year of its second generation, making it a dated product, although it was updated for 2015. The 2017 Volkswagen Touareg offers little in the way of newness, though more collision avoidance systems are available and there is a change of model names.

The 2017 Touareg offers just one engine, a V6. The hybrid and diesel models have been discontinued. The hybrid was a slow seller, the diesel banned for cheating on emissions tests.

The 3.6-liter VR6 engine makes 280 horsepower with strong torque, mated to an 8-speed automatic transmission. It has less power than most rivals, but it’s more capable on rough roads, and can tow a hefty 7700 pounds.

EPA estimates are 17/23/19 miles per gallon City/Highway/Combined, so it’s not much of a contender in its class for fuel economy, but at least it runs on Regular gasoline. Some of its competitors demand Premium.

It hasn’t been crash-tested by the NHTSA, but the IIHS gives it the top Good rating in the moderate overlap front, side impact, roof strength, and head restraint tests. The IIHS also gave the Touareg’s collision avoidance technology an Advanced rating. Touareg’s 3-year, 36,000-mile bumper-to-bumper warranty is less than its luxury rivals.

Consistent with Volkswagen design, the Touareg is mature while being sophisticated for its simplicity. The body doesn’t say anything other than SUV, although thin pillars and a low beltline mitigate the heavy appearance. 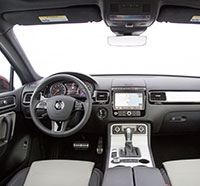 The cabin design is reminiscent of the Volkswagen Passat though with nicer materials and more features. The fit and finish far exceed the Volkswagens built in America and Mexico, as they should for the price. Still, we expect more of a high-end feel. The quality doesn’t match BMW, Mercedes-Benz, Cadillac, Range Rover, or Infiniti, but it’s close enough to be competitive.

Not surprisingly for VW, the position and function of the controls is clean and intuitive. No nonsense, and we appreciate the time and confusion it saves us. So too should drivers who don’t like distraction.

Curiously, the infotainment system doesn’t include Volkswagen’s CarNet system, which is similar to GM’s OnStar and offers diagnostic and convenience features through a smartphone app.

The front seats are excellent, with a high seating position offering good visibility through the windshield; thin roof pillars and low beltline add an airy feel to the cabin. However the tall and wide center console tends to make the front feel cramped, despite the good room in front.

There’s good room for three passengers in the rear, as the rear bench slides six inches. There’s no third-row seat like in the Audi Q7.

Cargo space is quite good, with a power-folding arrangement that yields a fully flat load floor. With the second row raised, there’s 64 cubic feet, a bit less than most rivals.

The Touareg Sport model has lots of shiny silver and gray plastic trim. The Wolfsburg Edition has brushed aluminum, and the Executive glossy wood. As for seating surfaces, the Sport has reasonably convincing leatherette, while the Wolfsburg and Executive have soft leather.

The V6 engine makes 280 horsepower and 266 pound-feet of torque, less than rivals, but enough to move the nearly 4700-pound Touareg reasonably well. And the 8-speed automatic makes the most of the power.

The Touareg handles better than might be expected for its weight. The steering is tuned more for cruising than cornering, but it’s nicely weighted and helps the vehicle feel relaxed. The Executive, with its 21-inch wheels and lower profile tires, rides stiffer.

There are no offroad modes, nor adjustable air suspension, but there are 7.9 inches of ground clearance, so there’s a modicum of unpaved road ability.

The Touareg is stylish and thoughtfully engineered, but it’s slow and thirsty compared to rivals, and expensive. It’s also in its sixth year without a redesign.